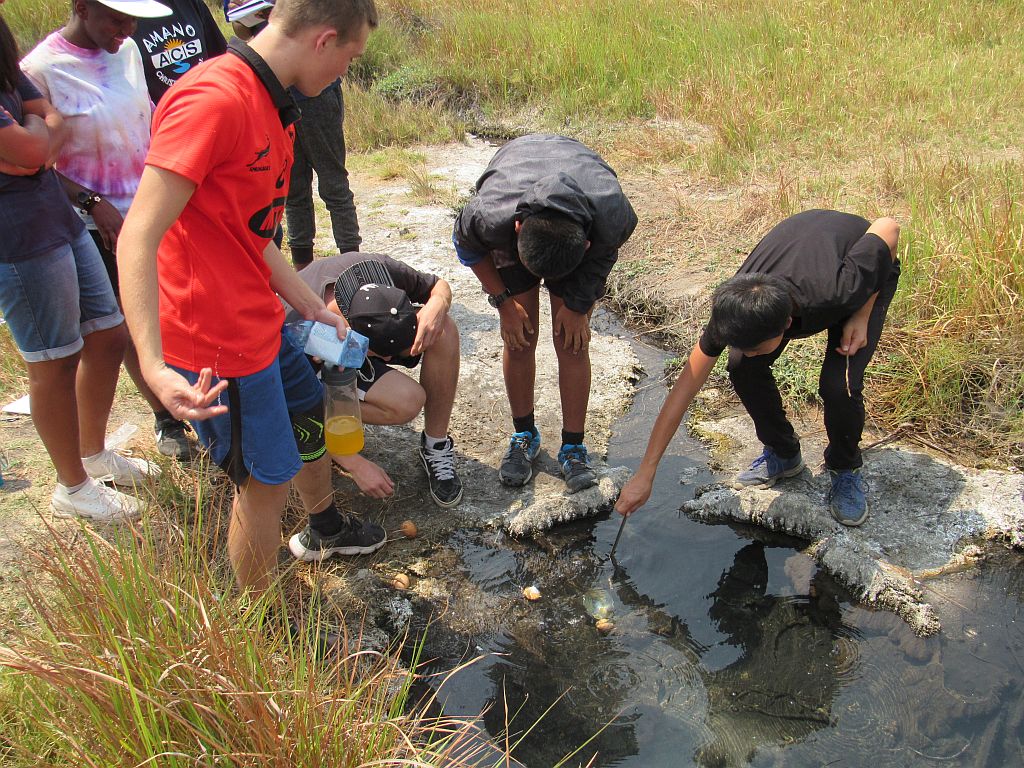 Seven grade 9’s ventured into the unknown, a five day trip to Kafue National Park, to learn about hydroelectric power, geothermal power, river systems, challenges of conservation and the Biblical perspective on sustainability and conservation efforts. All packed into one vehicle and a trailer we set off early Monday morning so that we could be at Musungwa Lodge by 16.00hrs. Lunch at Fig Tree Cafe had a funny incident with Edward impersonating a speed trap with his binoculars. A passing motorist soon told him what he thought! The excitement slowly wanes as the hours go by, but it was a good journey with a sighting of ground hornbills and baboons late on. With supper being prepared the kids found some tennis racquets and demonstrated their lack of knowledge of the game, but had fun unwinding. Sunsets over the lake are always good at this time of the year.

Tuesday’s plan was to tour the hydro scheme first and we had a thoroughly good experience. The guides were great and we were given all area access, even getting to see the rotating generator shafts up close and the control room. As a result the trip to the hot springs was shortened, but the kids were able to boil eggs, do some basic chemical tests, learn of the potential for energy production and enjoy the different flora in the area along the sandy ‘roller coaster’ ride.

Before the swim is the hill run! After the swim we began the Liloba Game Park Quandary, a role play game designed by Daniel Vedder, a former student and teacher, which gets the kids to negotiate deals depending on their character and try to come to conclusions and settlements over a fictitious game park. Graham certainly found his role vexing as no-one gave him any room for manoeuvre! Gunja had played a traitor’s role it seemed. We also go for a walk around the lake shoreline for a bit and see what we can find. Cormorants, darters, fish, crab and prawns along with Hippopotami which always got Yestin somewhat excited as they were his favourite.

Wednesday was time to leave Musungwa and start heading north again. We entered the park having secured our pack lunches and spent the morning hunting around the Ngoma head quarters. Everywhere was very dry, much more so than last year, so we couldn’t find water birds very easily.

Duiker, puku, impala, kudu, hippo, waterbuck, hartebeest, sable, warthog and various birds including a malachite kingfisher, were all found, but the elephant and giraffe remained very elusive. This year we were to stay at Kasabushi campsite situated on the Kafue River itself. A beautiful spot where we could set up camp and start cooking supper.

During the night a leopard came right past the camp and remained for sometime. Later we found it had bagged a bush buck two days before, so we were clearly in its hunting ground!

Thursday was off to Kafwala some 100km north. We were able to spend lots of time looking for game, getting quite lost in the Shishamba loop area but gradually finding more animals. Some students were keen to win the ‘Best Spotter Award’ and after sighting bushbuck, buffalo, marabou storks, bataleurs, reedbuck, oribi, a turtle, hadeda and other birds, finally Miss Margaret spotted our first elephant, a slightly separated and agitated youngster who was not keen to hang around. We had to move on though to make good time for camp and our sundowner boat cruise at Kafwala Rapids Camp. It was also the place for more homework. This time on the subject of river systems, learning the uses, demands, needs of the Kafue river basin. Later, after all the bumps and hours searching for that still elusive giraffe, we cruised the Kafue sighting more elephant, a finfoot, monitor lizard, half collared kingfisher, crocodiles, hippos and just enjoyed the sunset and tsetse flies!

The best spotter turned out to be Edward, who through many false alarms, was the one who spotted the most firsts. Graham and Nate and Miss Margaret had also done well, but after two days Edward came out tops.

It was good to have quite a few students who showed a lot of interest in everything and not just the big animals. It was a little gutting to find out that there are no giraffe in Kafue NP. The local Ila people do not have a word for them, they have never been here!

Friday was pack up and go day. It is always a bit of an anti climax once you reach the Kabanga gate and we hadn’t seen too much in the top section. Because the year was so dry much of the vegetation left to eat was not near the river and so animals had gone far and wide for food, making it more difficult.

This trip was a success though and the kids enjoyed it. We are very grateful to the Schempps for use of their trailer and the opportunity the school gives us to go. The Lord looked after us and it was great to get to know the kids a little more. I hope they learned something too.